How to Celebrate Festivals the Eco-Friendly Way 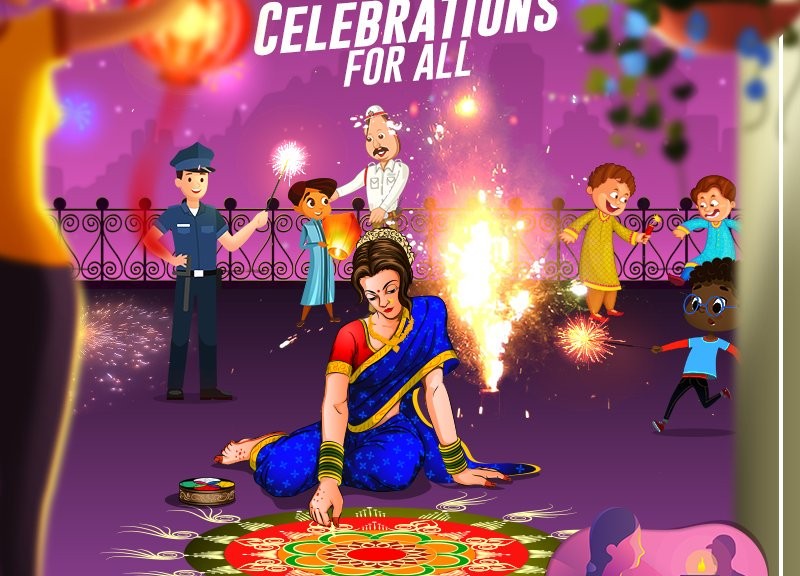 Festivals in India bring together the entire nation in celebration and merriment. Not only are these celebrations held on a significant scale, but they are also held very frequently owing to the vast and diverse cultural presence in our country. While all the festival celebrations are intended as a peaceful homage to the Gods and Goddesses, it has sadly begun affecting the environment in ways that are far from holy. Some may even say that these celebrations cause pandemonium in more ways than one.

However, here’s one thing that everyone can agree upon - the activities we partake in during festivals are some of the major causes of air, water, sound, and land pollution. Despite many activists working towards numerous ways to help curb pollution, there is still a lack of awareness amongst the common population in our country.

To completely eradicate pollution during festive celebrations, everyone must work towards celebrating the festivals in an eco-friendly manner.

The question is, how do you make sure that the celebrations are all eco-friendly? Here's how:

Avoid Immersion of Idols Made of Toxic Materials

During festivals like Ganesh Chaturthi, the celebrations mostly end with the immersions of idols into lakes and rivers. True, the entire affair is extremely zestful but there is no denying that this is incredibly mutilating for the aquatic life. Plaster of Paris (POP), the main ingredient in the construction of most idols, emits many toxic chemicals like magnesium, sulphur, and phosphorus.

These toxic chemicals pollute the water and make it acidic. Not only is this deadly for the fish population but the people who take a bath in these waters are also at risk of being harmed.

The best way out of this is by constructing idols from biodegradable and recyclable materials. This way, you don't have to compromise with the idol immersion; you are doing so without causing any pollution. Furthermore, you should also avoid the use of Polystyrene or more commonly referred to as 'thermocol' and plastic items in your celebrations. Try using recycled paper or clay instead.

Avoid the Use of Chemical Colours

Holi, the festival of colours, is celebrated with the utmost zeal throughout the nation. While the festival is indeed a colourful and bright one, the future, however, would certainly not be the same if the use of toxic and chemical colours persists. Chemical colours contain harmful ingredients such as lead oxide, copper sulphate, mercury sulphite, and aluminium bromide. Several health problems arise due to the use of these chemicals; ranging from dermatitis to even cancer. Besides that, these chemicals get washed away and mix with the water, inevitably polluting it.

The same happens when these colours mix with the soil. A much better alternative is using organic colours. Neither do they cause skin and hair damage nor do they cause any pollution.

Also, try playing a dry Holi, minimise the use of water, and refrain from using water balloons. The use of water balloons is often chaotic, with everyone throwing it on everyone and everywhere. The rubber from these balloons is extremely dangerous for animals as they may ingest them. Even the house doors and windows take a beating during Holi. However, with the latest waterproof or monsoon proof doors, this concern has been mitigated.

Avoid Firecrackers, Light it up with Diyas and Candles

Although Diwali is considered as the festival of lights, it has become more rumbustious and a festival of noise. The ritual of burning firecrackers is greatly hazardous, the gravity of which is yet to be acknowledged by many. The noisy firecrackers and blaring loud music have adverse effects on not only humans but even animals and birds. Some of the firecrackers also emanate poisonous gases greatly contaminating the environment. The smoke too gives rise to serious lung problems.

Take a brighter route this Diwali – light up your premises with candles and diyas instead.

Some of the other problems that arise during festival celebrations in India include the multiplying of insects and mosquitoes. In times like these, the installation of a mosquito mesh for windows has become extremely important. Apart from that, ensure that you only use reusable and recyclable items during your festival celebrations and even otherwise.

Also, help spread awareness to as many people about the environmental concerns that exist in the current times. Celebrate, but with empathy for the environment around you.